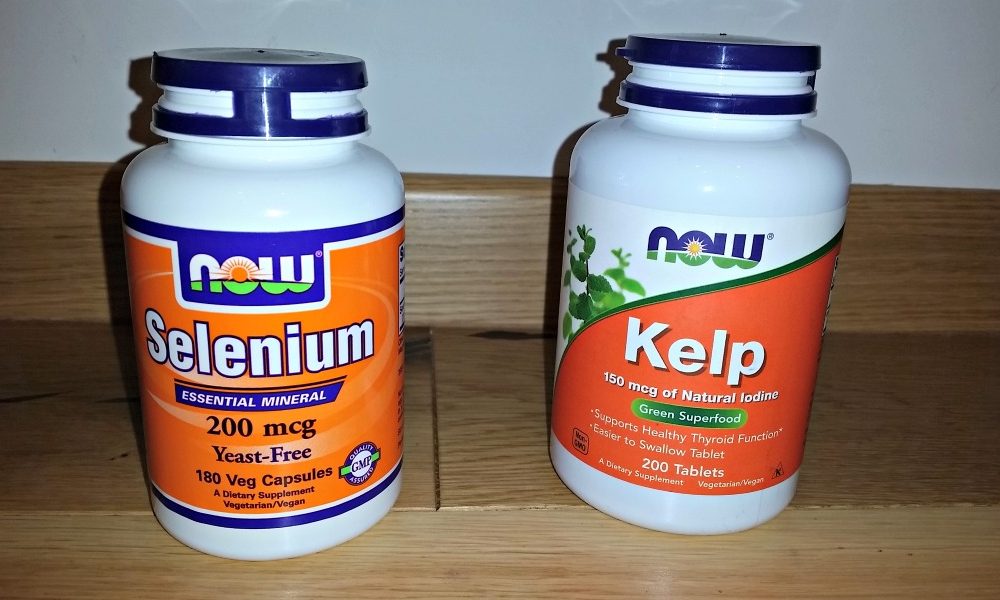 I was diagnosed with an autoimmune disease, Hashimoto’s Thyroiditis back in 2007. Even though taking iodine is forbidden with Hashimoto’s thyroiditis, I took the decision to have it as a supplement.

I had serious symptoms of iodine deficit, I will just note mine, and you can make a research for all of them by yourself – dry skin, especially on the elbows it felt like sandpaper. All my life I’ve experienced breast pain, just like a teenager, and right before my period it would get really painful. I knew that when my breast started to hurt really badly, I had 7 days to my next period; they were like a calendar for me.

I had thousands of cherry angiomas on my left leg, which is a symptom for an excess of bromine, which can happen if you have iodine deficit, as the iodine clears out the bromine from the body. I have one huge cherry angioma on my shank, which slowly grows bigger with the years passing.

I used to avoid iodine and foods that are rich in iodine since 2007, right when I was diagnosed with Hashimoto’s thyroiditis, and the endocrinologist told me just one thing and that was to avoid iodine at any cost!

Before I started taking iodine as a supplement, I did some research for a couple of months and I learned that iodine can be harmful regarding the Hashimoto’s thyroiditis.

I read everywhere that it’s advisory to start with at least 3-4 weeks of taking selenium before taking iodine. I took selenium for 2 months before starting with iodine, I decided to take things one step at a time and with baby doses.

After 2 months of taking selenium 100 mcg per day (I now have 200 mcg), I started taking iodine under the form of kelp, which is equal to 75 mcg, which is a baby dose of iodine. I bite off the kelp tablet, which is 150 mcg each. In the beginning, I cut them with a knife, but then I started biting them to save time, they taste like seaweeds.

After 1 month, I increased the dose to 150 mcg iodine, which is a whole tablet.

After 2 months of taking iodine, I noticed that:
– I didn’t have any breast pain, not even before periods

– For the first time in my life, my elbows weren’t white as sandpaper, but they were soft!!! I’ve always had dry elbows; the skin was very harsh, white and peeling. Even if I put lotions, it wouldn’t be absorbed and would stay the same. And now, without rubbing anything on them, they are soft. Miracle!!!

– I had less cherry angiomas on my legs. By saying less, I don’t know how many exactly, as they were hundreds, even thousands, and I can’t really count them all, but they have decreased more than the half.

– I could go out without having to put creams on my face and hands. I always put some cream on! Otherwise, I would feel my skin very tight and the skin on my hands would be peeling. I noticed I was skipping the cream from time to time which was new for me.

– I would feel better as a whole

– I had more strength and endurance while working out

I had solid evidence that iodine is good for me at this time.

I don’t know how it would be in the future, but I need it now.

Warnings:
I am not a doctor so don’t take anything written from me as a suggestion to take iodine as a supplement.

I have a Hashimoto’s thyroiditis with a hypo function of my thyroid gland. The iodine makes the thyroiditis gland to work more.

The iodine is counter-evident to hyper function of the thyroid gland, to Graves’ disease, if you have thyroid nodule. There are other conditions that it’s not advisory to take iodine.

Make a research for yourself and take informed decision whether you should take iodine.

I take iodine as a supplement on my own responsibility, my endocrinologists don’t allow me.