The Island Of Lampedusa 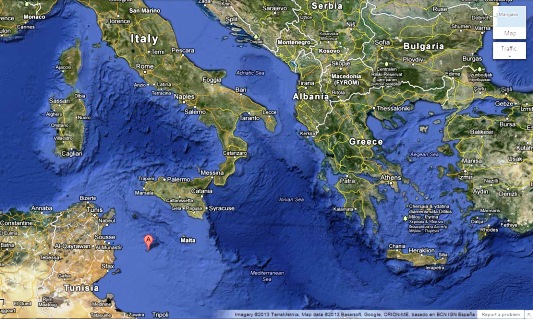 Lampedusa is an Italian island in the Mediterranean (the red dot in the map). It’s closer to Africa than to Europe and in fact it is part of Africa as far as geography is concerned. You can get there with either a flight from Palermo or Catania or with a ferry from Malta and some other Italian cities. The island is small, 11 km long and 3 km wide.

Lampedusa is a preferred tourist destination mainly for Italians and there are few foreign tourists.

The island is not a typically luxurious place. Most of the buildings need rehabilitation.

One can see laundry hanging overhead and rubbish all over the place, but this is so at the places which are not particularly popular.

The beaches and the popular spots are clean, but one can see lots of rubbish while traveling or walking.

Lampedusa is unique for its cliffs, which boast a magnificent view to the sea, small inlets, delicious food and nice people.

In July and August the place is crowded with Italians, who speak a lot, fast and emotionally 🙂

Food
The locals make a living from fishing and tourism. Seafood is very popular. We liked a lot Dentex fish cooked from a local recipe, baked with salt, lemon juice, capers and some herbs ( (thyme). This is a kind of white fish. It smells of seaweed rather than of fish.

I first tasted it at Mariano’s. The restaurant is right at the Port by the gas station. This is a family run restaurant. Mariano welcomes his guests and takes the orders. The mother cooks, the daughter serves the dishes, cooks and helps whenever necessary. This is a very sweet family, which I almost failed to appreciate.

The exterior of the restaurant mocks a rock. The menu is in Italian and no one speaks English! We were on the point of leaving as we had no clue what we would eat. But Mariano pointed to his eye then to the kitchen. I grasped it that he was inviting me to see the food for myself 🙂 The kitchen was perfectly clean! I picked up Dentice fish for its look 🙂

To express his gratitude Mariano brought us pickled seafood with a polite gesture meaning “a gift from me to you”.

The food tool a long time to cook, some 30 or 40 minutes to bake the fish, which means that the food it natural. As he could not explain that the fish is almost done, he called me back to the kitchen so that I could see the progress of the cooking. I felt touched by this attempt at establishing communication with no words!

While the fish was cooked they brought the traditional basket of bread, but at Mariano’s it was toasted and smeared with herbs and some olive oil. I hadn’t eaten so much bread for the last year (I abstain from gluten) – I’d forgotten it was mighty tasty! So I ate a slice after a slice and supported it with wine. In a word, we ate like kings.

By the time the fish was cooked we drank up a small bottle of wine, so a second basket of bread was served. So simple and so delicious.

We ask for the bill, but Mariano points to the chairs that we should stay. Cheesecake is served in a minute.

Oh my! This is a treeemendously deeelicious cheesecake with lots of butter, lovely jam with little sugar so you can feel the smell of fruits. I ate it all up.

I recommend without reservation Mariano’s restaurant “Delfino blu”. Every day we would taste something new.

I ate a pizza with four cheeses (pizza quattro formaggi). It was very tasty. The pastry is amazingly thin, topped with so much cheese that I felt the fat.

I tried spaghetti with tune fish (fresh, not canned); they were grand. The spaghetti of course are cooked al dante (meaning that they are cooked so as to be firm).

The salads are very tasty too for the fresh vegetables. I have no idea if they are grown in Lampedusa, but they are very fresh and sweet-scented.

The icecream – I though it’d be more tasty remembering its taste from our visit to Rome 5 or 6 years ago.

I saw a certificate of origin at a place and I noticed that they make it using margarine. For this reason I didn’t buy one from that particular place, but I guess that it’s the same everywhere. I ate icecream four times.

Transport
There is no public transport or taxis at the island as it’s very small (although they mention two buses in this travelogue). One can hire motorcycles and ATVs. You can hear motorcycles droning all the time, ridden by locals and tourists – this is the most common means of transport. We chose ATVs and I think that this is the better choice should you decide to walk the whole island. You can crisscross the whole island but there is no road at some places and the ATV copes with ease with the dirt roads, mud and stones. And it’s also a source of adrenaline.

The locals are very calm and laid-back. We asked where we can park the ATV and if it’s safe to leave it like this and they told us that there was no problem whatsoever to leave it anywhere. After all this is an island, if anyone steals it, where shall they hide it 🙂

You can also hire a boat for the day and take a tour round the bays to find a desert beach.

We had a cultural shock when we saw the beaches as we are used to huge wide beaches in Bulgaria. The beaches in Lampedusa are small. They call a beach every place bigger than 5 square metres covered with sand.

The beaches are very nice but small. Sunny Beach and Golden Sands will appear boundless to the locals 🙂

The most popular tourist venue is Rabbit Beach (Cala Conigli).

You can walk from the town to the beach in 1 or 2 hours. It is a 10-minute drive; there is a small parking lot, then you climb down along a nice path. The place is well looked after and you can see wild plants living along with cultivated plants.

In May there is thyme growing all over the place and the aroma is astonishing. There are also huge thorns in amazing colours.

The trail winds down and the access to the beach is easy.

Endangered species of turtles lay their eggs at this beach; this sounds beyond belief today as it’s too crowded. But who knows?!

The beach is covered with white sand and the water is azure. There are no umbrellas, cafeterias and restaurants; you need to have brought everything you need (such as water or umbrella).

Romantic dinner
I couldn’t resists the temptation to “cook” at the island. We had a lovely huge terrace so I thought that a dinner with a view to the sea would be very romantic. Well, we couldn’t have it at the terrace as it was very windy, and we had had too much cold riding the ATV (about 18 to 22 C in the evening, in May, but with the wind it feels colder).

So I “cooked” scamorza, mozzarella, provolone, pesto Genovese, olives, bresaola, cherry tomatoes and green salads. We had red wine recommended by a local owner of a cheese and wine shop. A beloved person, delicious food and wine – this is what I call romantic 🙂

Food during travelling
When I travel I don’t eat anything until I see something I like. The food on the planes is terrible so I never eat it. I take almonds with me which are okay to carry on board, but the trouble is that I usually forget to take them in my cabin bag. Luckily the flights were short and it’s none of a problem to have one day without any food. When we arrive I make up for the abstention and I eat whatever and how much I wish.

There was a nice salad bar at Munich Airport so I made a great salad there (550 g).

I also liked a potato salad but I could not eat it up as it was huge.

Gorgeous, how are you? Do you have strong muscle soreness? If yes, just look at the workout do 2-3-4 reps of the exercises just to ...