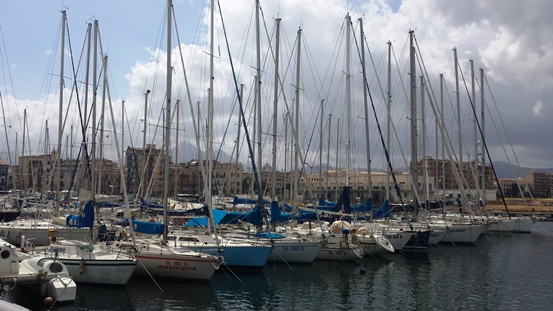 On our way to the Island of Lampedusa (Sicily, Italy) we took a flight via Munich and Palermo. We had an eight-hour stopover in Palermo. We used the time for a swift tour of the capital of Sicily. I had prepared two versions of the trip from Palermo Airport to the city center, so I had two solutions depending on whether they had checked our luggage either to Lampedusa or to Palermo. 🙂

We could possibly take a stroll down Palermo with our suitcase (since I follow the idea of minimalism Baby and myself have been travelling with one suitcase). Luckily, they had checked the luggage to Lampedusa directly so we were free to enjoy our walk (although we were wondering all the time where our luggage would get provided that we’d changed three flights.

So, we took the Prestia e Comande bus at the airport, which took us to the Port of Palermo in forty minutes. There we saw several blocks of flats parked at the coast! This was the first time in my life that I had seen such huge ships. One of them was a nine-storey ship!

We took a walk round the neighbourhood above the port. The buildings are ancient. I liked the vast balconies and the wrought iron railings.

Old buildings always strike me as very impressive. The streets are very dirty, there’re heaps of rubbish everywhere. You can hardly meet anyone who speaks English, so they always explain things in Italian. But they are eager to help and somehow they manage to do so.

The most popular souvenir tourists can buy is something with the image of the Godfather – a T-shirt, glasses and so on…

I hadn’t had any coffee yet so I felt a slight headache due to the lack of caffeine. I entered a teeny-weeny cafe with two chairs and we had Italian espresso right at the bar. This coffee is as much as one big or two small sips.

The cream only contains no water. It is a little sour and I liked it a lot. We drank our coffee at a gulp standing at the bar – this is how you drink coffee Italian style 🙂

Having the recommendations of the tourist guides we took a stroll down Via Vittorio Emanuele, embarking on our tour from the Quattro Canti (Four Corners) square.

This is a tiny little square with fascinating statues at every corner. There were similar little squares in Rome (we saw them five years ago during another trip we took).

We sat at a restaurant at one of the cross-streets to have dinner. Italian seafood is super tasty. I had grilled seafood mix, Baby had grilled swordfish.

Salads are not as big as what you can get in Bulgaria. I felt like having some wine but I had got a mere two hours of sleep the previous night so I feared I might feel drowsy. They offer coffee after lunch. These short shots of espresso are weaker than the long coffees we are used to. One might well drink two short Italian coffees.

We went on with our walk along Vittorio Emanuele, which takes you to the old Port, which is now used as a yacht port. Here you can take lovely postcards of photos 🙂

On our way we encountered a sightseeing train so Baby, the gentleman he is, offered that we go sightseeing by train. One could easily see that the lack of sleep was giving me a hard time. But I bravely refused the offer and I said I’d rather walk round the place. An hour later I wanted a train but there was none.

We saw the Library.

There are small motorbikes all over the place, which jump out at every corner and get over traffic jams.

Italians don’t spare their hooters. It’s a close shave every time when they pass each other.

I enjoyed Palermo a lot despite the old and ill-kept buildings and rubbish in the streets. But there is this special atmosphere and this is what a like about a place – when there is something you can feel beyond what you can see.

This week I had