Juicy summer cake that is full of aromas. I tested it with cherries, banana and apricot to be sure that I could make it all year round.

I tried it warm, 1 hour after baking and it was super tasty with a ball of melting ice cream on top. After staying in the refrigerator, the aromas had developed and it was delicious in a new way.

Cherries make it sweet with a slight sour note, which reminds of fresh summer mornings before the sun weighs on the sky, when the expectation of something amazing to happen floats through the warm air.

With bananas, it is super tasty because they are baked, and a baked banana is so rich aroma that you cannot get enough of. With apricots, it is also very delicious. You can prepare half with one fruit, the other half with another.

It is quick and easy to prepare. This is an adaptation without white sugar of a traditional cake
“Clafoutis”.

Ingredients
400 g homemade yogurt *or sour cream
250 g dates, pitted – it becomes quite sweet with that much
6 eggs
100 g of einkorn or other wheat flour
2 tbsp. liquid vanilla
500 g cherries * or other fruits (according to the season)

* I used homemade sheep’s yogurt, which was as thick as sour cream. The recipe is also tested with sour cream. The cake has been tested not only with cherries, but also with bananas and apricots. It turns out great, only the bananas do not stick to the dough as well as cherries and apricots. You can also try peaches or other fruit of your choice. 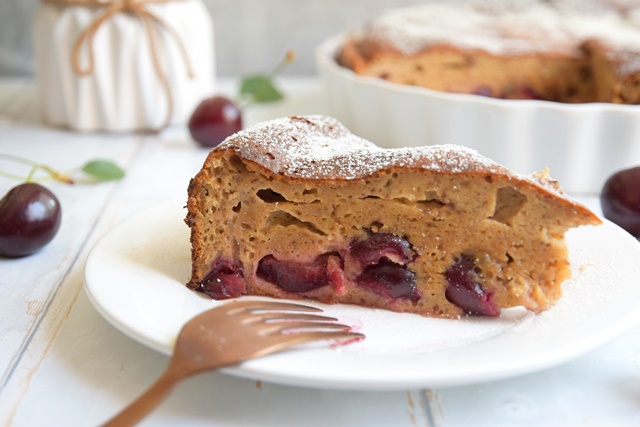 Method
Blend the milk/sour cream and dates until homogeneous. In a bowl, beat the eggs (with a hand mixer or wire whisk) on low speed and add the cream with the dates, vanilla and finally the flour.
Remove the pits from the cherries and place them on the bottom of a baking dish, then pour over the dough.
If you do not want to jumble the cherries, pour the dough with a spoon between them.

Baking
In a preheated oven at 220 degrees Celsius, with lower and upper heating, with a fan (it’s tested without a fan as well), for 35-40 minutes. In my oven, it had caught a darkened crust in 35 minutes.

Refrigerate for at least 3 hours. Optionally serve with fresh fruits and/or ice cream.
A springform pan 28 cm in diameter was used.

* If your oven is strong, bake for 20 minutes! Watch it because it burns very fast! When it got the crust, it’s ready.

Serving
Cut into 12 pieces at least 1 hour after baking. While warm serve with a scoop of ice cream Yummy! Chilled is also very tasty.

Approximate nutritional value for 1/12 of the cake with cherries according to cronometer.com
Kcal 213
Protein: 5.6 g
Carbohydrates: 30.1 g
Fat: 9.2 g

Approximate nutritional value for 1/12 of the cake with apricots according to cronometer.com
Kcal 207
Protein: 5.8 g
Carbohydrates: 28.1 g
Fat: 9.2 g

Approximate nutritional value for 1/12 of the cake with bananas according to cronometer.com
Kcal 224
Protein: 5.6 g
Carbohydrates: 32.9 g
Fat: 9.2 g

Hi, Gorgeous 🙂 How are you? The holidays passed and it is time to get in shape 🙂 I will motivate you with Mira this ...