Ao Nang is a small resort town visited by many tourists. We decided to go there because it’s easy to travel to the other islands around from Ao Nang. The islands have beaches just like post cards – white sand, blue water and … many people. The place is wonderful and the only disadvantage is that it’s too crowded and noisy. 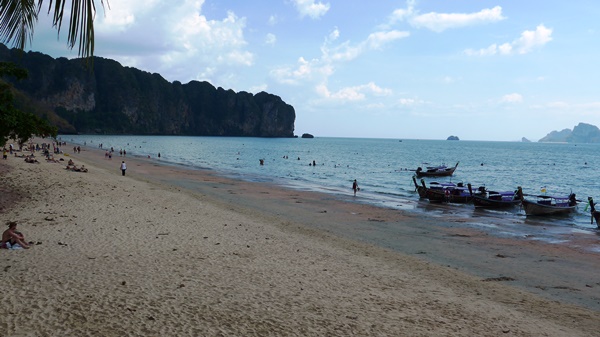 Ao Nang’s beach is also great, but noisy because of the non stop coming and going boats, the engines are like firing rockets 🙂

We go to a journey to Chiken and Poda islands. I liked the Konrad and Reginas’ itinerary for 4 islands around Krabi and Ao Nang. They also take better pictures than me 😀 .

We hired a boat with boatman and for 15-20 minutes we went to a post card beach. We were lucky that at that time there weren’t many people and we were alone on the beach. We also made pictures without people on them. 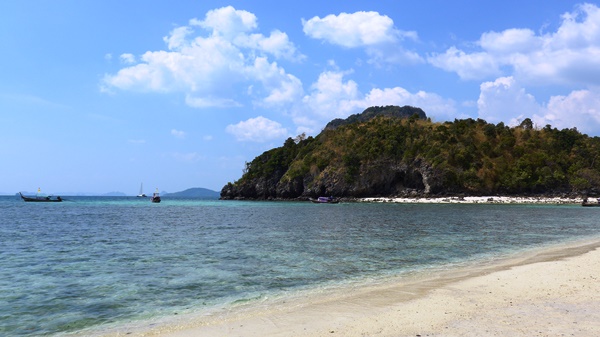 In Chicken island we ran in to low tide. The island has 2 parts and when it’s high tide they are separated by water and they seem like 2 different islands. 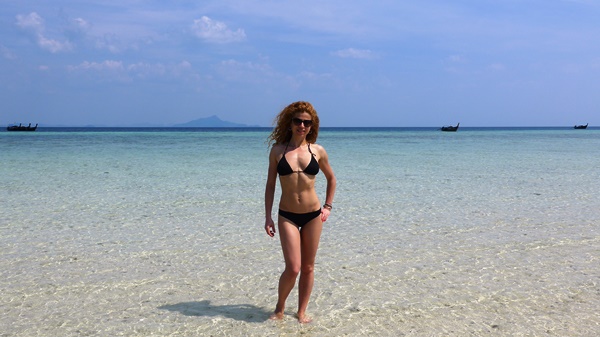 Low and high tide have impressive difference. One day Ao Nang’s sea has pulled about 100 meters in, I haven’t seen such thing. 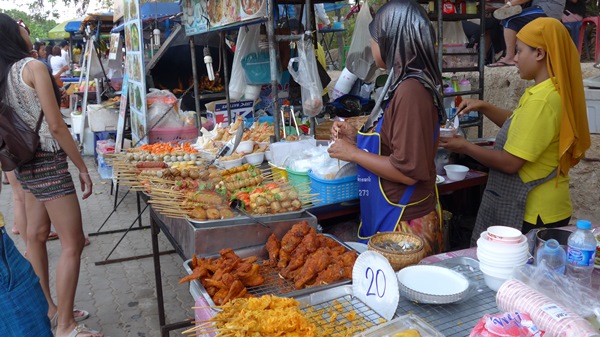 I was impressed by the street food. There are places to eat and many street cars with food everywhere. 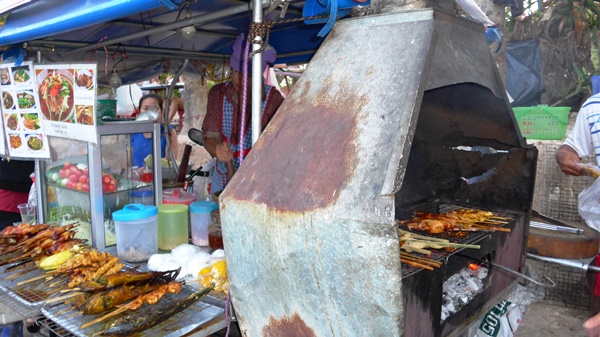 In these food cars there are baked on charcoal meat, fish, vegetables, also soups and salads. It’s incredible how many things can be prepared in a small food car. I tried some things and they were delicious.

A Thai massage is offered at every step, they literally catch you on the street and pull you inside. The massages studios are hundreds and about 10-15 people work at every place. All day and evening you can see somebody getting a massage. The price is 200 Bahta for an hour, which is under $7. I tried legs and total body massages. They were great!

We were to a boat trip to Railay beach. It was also beautiful but too crowded beach. There is an interesting cave on one of the sea shore’s.

Freely walking monkeys are bagging tourists for food or they grub in the garbage. I want to take this little monkey at home 😀 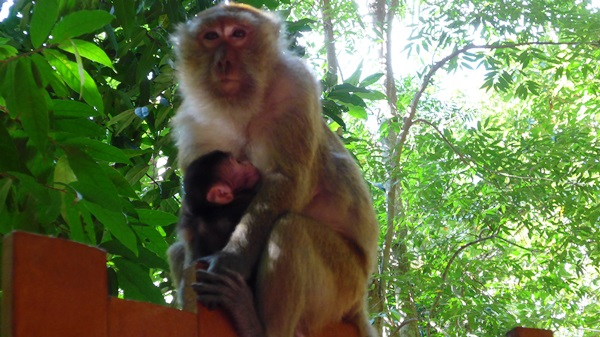 Thai food is most often fried or with no fat – two extremes. I didn’t try fried food. Tom yam with shrimps soup became my favorite. You always have to say “No spicy” or other wise you burn (literally). 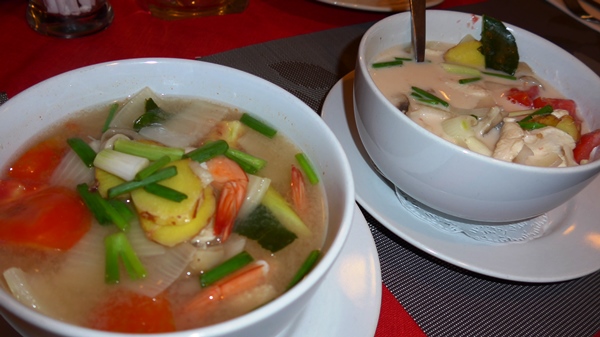 My breakfast was fruits, which we don’t have in Bulgaria (we have them but they are not ripe and have totally different taste) – mango, papaya, and so juicy pineapples I have never eaten! 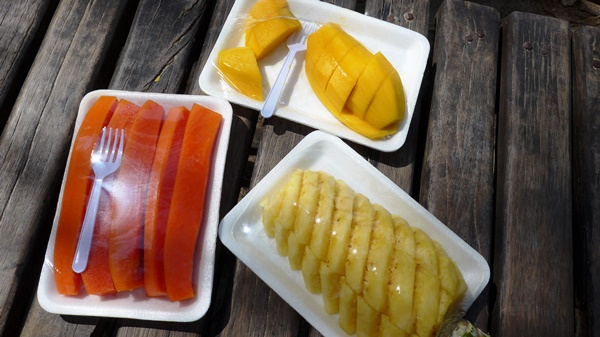 Tom Yam Soup, steamed rice (just plain), fish, squid, salad, veggies for dinner. Here is a good recipe with pictures how to prepare vegetarian version of Tom Yam soup. And here is how to prepare tom yum with shrimps. 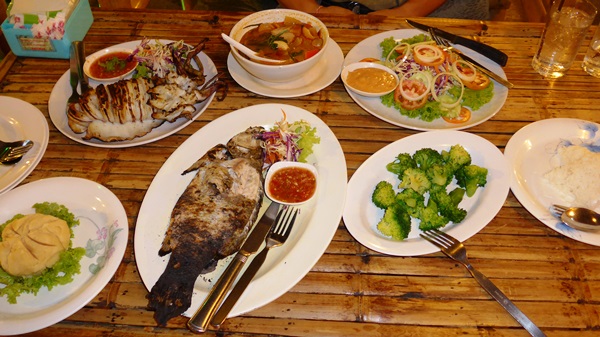 There was a small fitness at the hotel, which was just mine. Nobody came except me. I did a workout 2 times, just to check a workout.

This is the view from our room 🙂 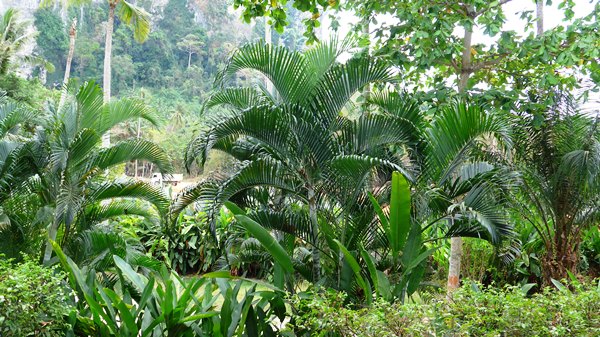 After that we went to Bangkok where I didn’t train at all. We were outside all day long walking almost all the time. 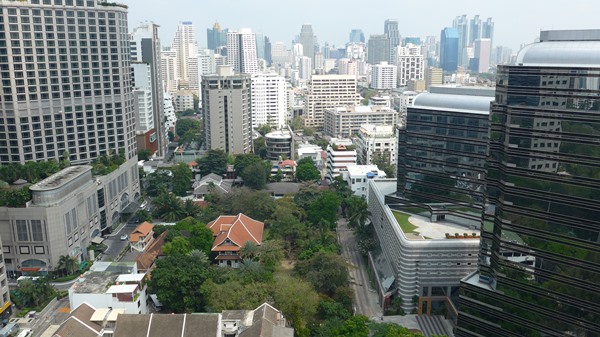 In the evening all I want was to take a shower and not to step on my feet. Or to sit on the balcony’s floor and to watch Bangkok at night. We had really great 19th floor view. Street food and Thai massage here is everywhere also. 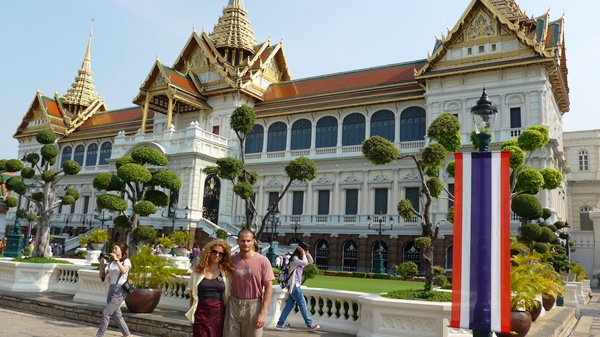 Grand Palace is impressive although watched outside behind a wall, which surrounds it to look like a child’s toy. It’s extremely colorful, variegated, gold, maintained palace. Work on it does not stop, restoration, it’s all hand painted. Because we were with shorts, they gave me skirt and shirt (because my shoulders were naked), my Love got trousers. 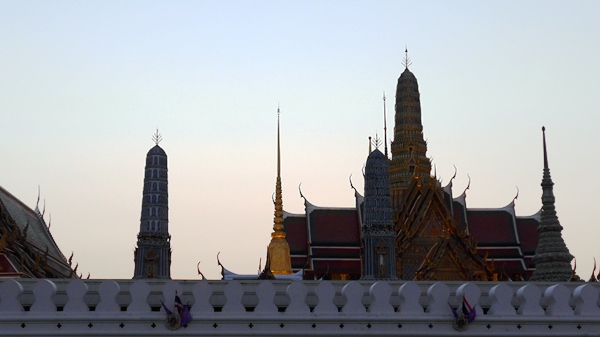 In front of the palace there are people who lied us for something like scam. It was in the afternoon and they told us that the monks are praying and the palace is closed.

To do a boat trip along the river and to come back in an hour. And so we did, but after that we found out that the palace is not closed, but the locals make money with boat trips. 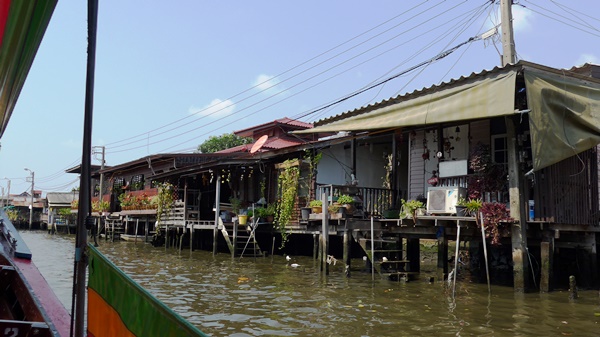 The boat trip was really impressive, may be because we didn’t plan it and suddenly we ran in to the conditions people around the river live. The river is so dirty and all around it is built with houses, most of them seem dangerous and will fall down each moment. But there are people who live in these houses. Foundations of the houses are in the water and most of them are wooden!

We ran in to a boat man who loves high speeds and we were like in an Action movie. The only missing was Tom Cruise to jump from the next boat and to save us.

We begged to leave us for 20 minutes in one of the temples Wat Arun, we saw it just outside. After that the boat man took and left us to Wat Pho – reclining (relaxing) Budha. We hired a guide man who told us about this place. I like to have somebody who tells us a fairy tale, just looking is not interesting for me. Monks study massage for some years here. We tried this massage, it’s very good, but it’s not done by monks 🙂 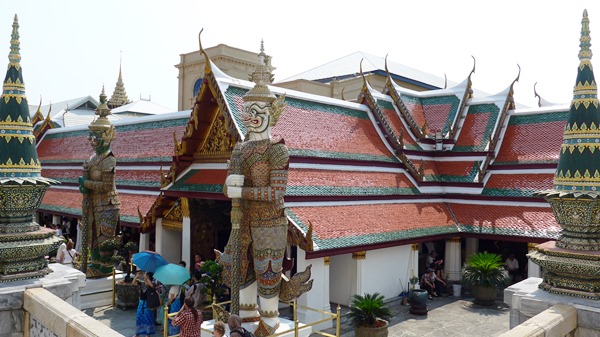 Grand Palace is near – we also hired a guide. He told us fairy tales for good and evil 🙂 I didn’t know that according to Thais monkeys are good, and demons bad. Sweet monkeys beating with demons seems kind of inequality to me 🙂

Here is Emerald Budha, which is most precious for Thais. There are 3 kinds of robes – for summer, rainy and winter season. The king changes the robes depending on the seasons 🙂 Here is a good article about historical center of Bangkok.

Thais love their king really much. Often on the streets you can see his pictures and to one of his daughters, the eldest which turns 60 years this year. It’s a huge celebration. All government buildings are decorated with white and purple ribbon, because they celebrate princess’s birthday all year long. She is born on Saturday. The purple corresponds to Saturday 🙂 Thais follow many rituals and signs! 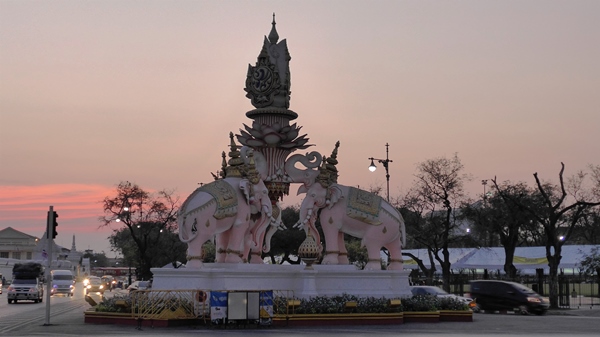 They asked us on which day we were born me and my Love. Wednesday and Monday. They told us it’s a strong relationship between people born on these days 😉 Many symbolism in everything!

Climate in March is great – warm, no rain. July-October is the rainy period, there is heavy rain. Often there are floods. You can read more about Thai’s seasons here.

Thai language is like a song. When they speak is the same as when I listen to a melody. They enunciate the last vowel long. They speak terrible English, you can’t understand anything 🙂

It’s awful to cross the streets in Bangkok. The green light of traffic lights separates to turning cars and nobody stops when there is a walking person. You have to pluck up courage to cross the street and cars may be will stop 🙂

The red light of the traffic lights is may be 300 seconds! Loong waiting.

Cabs are cheap (as in Bulgaria) and are cheaper than Tuk Tuk. Tuk Tuk are open cabs, something like motors which you can stop everywhere on the street. You tell where you want to go, the driver tells you the price, you can bargain.

Thais are not with overweight. They are shorter than Europeans and Americans.

I had the feeling that we are going to the country of smiling people, but Thais don’t smile. People are tired, it’s visible. They are not rude or unkind, first my expectations were for smiling people and that’s why I noticed.

It was a wonderful working holiday. I didn’t work out for 6 days. Now, I expect muscle soreness after my first workout 🙂 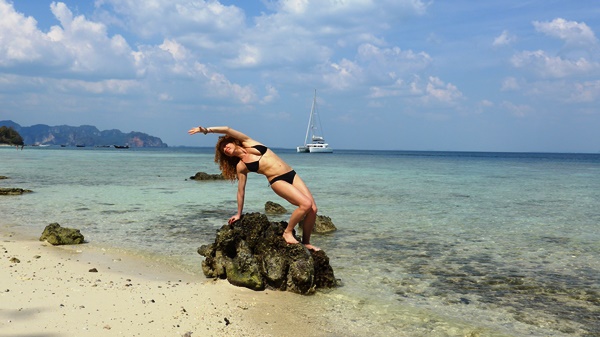 Have you been to Thailand? Do you have favorite small, sea towns that you recommend?

Gorgeous, are you ready for a new, strong week 🙂 We will do many forgotten workouts, Oldie but goodie 😀 And the new ones are ...